So what's changed for Wales since Tryweryn?

Even if they were not around to witness the flooding of the Tryweryn valley in 1965 many people in Wales will have heard of that infamous event. For people around at the time the flooding of the Valley - and the destruction of the welsh speaking village of Capel Celyn by the Liverpool corporation to create a reservoir - summed up Wales seeming second class status in the British state. A private members bill introduced and passed at Westminster enabled Liverpool corporation to get the go ahead for its plans without having to gain the consent of any local authorities in wales. And the fact that not a single MP from Wales voted for the bill on its final reading counted for nothing - communities, civic and religious leaders and politicians from Wales at local and parliamentary level were powerless to prevent the valley's flooding.Tryweryn was a grim reminder to the people of Wales that when it came down to it they were powerless to stop forces at Westminster doing whatever they liked with regard to Wales.

Fast forward over 50 years.There's a credible proposal to build the world's first tidal powered lagoon in Swansea Bay, a scheme which would have given a massive boost to the economy of south west wales and powered hundreds of thousands of homes with clean energy. And cheaper than nuclear power to, with the lagoon adding just 30p a year to people's energy bills compared to £12 a year for the Hinckley Point nuclear plant. The local Swansea council supported it and surveys of local public opinion showed strong support for the lagoon among people in the area. The Welsh Assembly supported it and so did Politicians from right across the political spectrum in Wales, the Welsh government even offered to put up £200 million to help finance the scheme.

But it has counted for nothing because under the terms of the existing devolution settlement large energy projects in Wales are still decided at Westminster. So just as Westminster has decided to plonk a dirty great new nuclear power station in north wales (they've still no idea where in Wales the hazardous waste it will produce is going to be buried incidentally) Westminster yesterday decided that the Tidal lagoon wouldn't go ahead in Swansea Bay, meaning the huge support the lagoon enjoyed among politicians and the public in Wales ultimately counted for nothing. Worth remembering too the Swansea Tidal lagoon wasn't going to cost the UK government a single penny - it was privately financed (contrast this with the 5 billion pounds the UK tory government are forking out to shore up the failing Wylfa B nuclear scheme).

But while the events in Tryweryn and Swansea Bay may be over 5 decades apart and involve a different set of circumstances there's one striking and very important similarity between the two - in both events a few people at Westminster were able to ride roughshod over the clearly expressed views of the welsh public and our elected politicians. Course when the shocking decision to flood Tryweryn was taken there was no Welsh devolution to speak of and the Post of Secretary of State for Wales had only just been created - yesterday's disgraceful decision was taken despite 20 years of devolved government for Wales.

And i wont waste to much time commenting on the abject role played in this snub to Wales by the joke of an individual currently masquerading as the Secretary of State for Wales. Suffice to say after this debacle - and his recent bout of extreme forelock tugging over the renaming of the Severn bridge - Alun Cairns is a strong rival to the revolting George Thomas for the title as the most obsequious toadying quisling Wales has had the misfortune to see. So it was good to see that Swansea's 3 Labour MPs have called for Cairns resignation as secretary of state for Wales and that Plaid Cymru have tabled a motion of no confidence in him in the Welsh Assembly and also called for the abolition of the now surely completely redundant post of secretary of state for Wales. 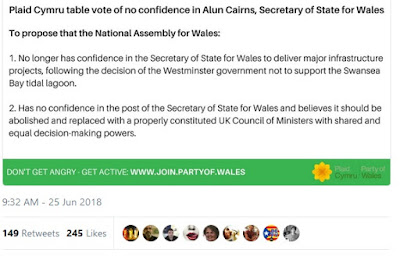 But of course as clueless and gutless as the likes of Cairns are it remains that the chief problem we in Wales face is that despite 20 years of devolution we are still as powerless to stop a Westminster government doing what it likes in Wales as we were when the decision was taken to drown Tryweryn 53 years ago. Now that really is a very worrying and depressing state of affairs.....and to which there is only one obvious solution ......

Rodolfo Walsh was an Argentinian investigative journalist and left wing political activist. He was born on January 9, 1927 about 1000 kilometers southwest of Buenos Aires. He was the descendant of Irish immigrants who came to Argentina in the mid-1800's to escape the ravages of the terrible Famine.

He studied philosophy before beginning a career in journalism in the 1950s. From 1959 to 1961, during the first years of the Castro revolution, Walsh lived in Cuba. There with the assistance of the Colombian writer, Gabriel Garcia Marquez, he helped found Prensa Latina, an international press agency set up to counter the conservative bias of international news agencies like the CIA controlled Reuters. It was Walsh, as an amateur cryptologist, who decoded intercepted CIA messages detailing plans for the Bay of Pigs invasion, thus giving Castro crucial warning of the impending aggression.

Later in the decade he moved back to Argentina to pursue his writing career and he became involved in the newsletter of left wing union organisation the General Confederation of Labour of the Argentine (CGTA). But following the death of Che Guevara in 1967 he decided to take a more active role in political struggle and joined the left wing Montoneros, an urban guerilla organisation. He quickly rose through its ranks, becoming its intelligence officer and infiltrated Montoneros agents into the army and government.

Following the 1976 military coup which gave way to Argentina’s infamous 'dirty war' against its political opponents Walsh was forced to go underground and founded a clandestine Latin American news agency in response to the Junta's press censorship. That same year several members of the Montoneros - including Walsh’s own daughter Victoria - were assassinated by the regime's death squads.

Shortly after posting the first copies of ‘Carta abierta de un escritor a la junta militar’, an open letter in which he protested against the Junta's right wing economic policies and their gross human rights abuses he was followed and ambushed by members of the Junta's military. He defended himself with a handgun but was injured in the firefight and captured, and was subsequently 'disappeared' by Videla's regime on 25 March 1977. His remains have never been recovered.

Although he considered himself a revolutionary above a writer, Walsh will always be remembered for the consistent manner in which his literature sought to uncover and expose the truth. An exponent of new journalism, the founder of investigative journalism and a defender of the free press, he played a hugely influential part in latin american political writing and investigative journalism worldwide.